By Now, I Should Know…

By now, I should know that cereal and I are futile breakfast partners in crime.

This story plays out the same way every single time. So, by now, I should know that, para mi, cereal is snack—not breakfast—material.

Yet, when I peer into my pantry and spy a mysterious addition of Honey Bunches of Oats’ new Vanilla bunches flavor, I immediately commence taste-testing.

It just so happened that, yesterday, I spied this newbie first thing in the A.M. And so cereal for breakfast it was. 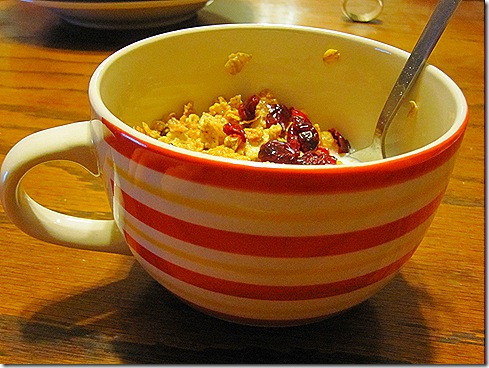 I attempted to change my standard cereal saga by eating out of my enormous new mugbowl—in hopes that pouring a larger than life portion would preclude my usual refillage. 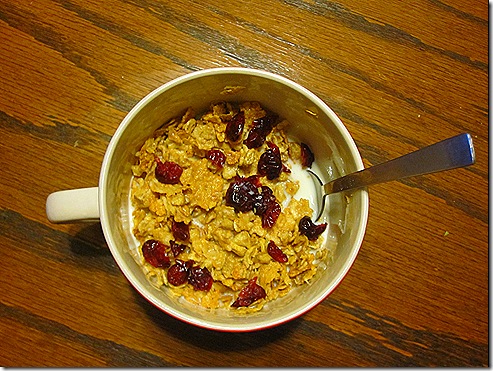 I also added some organic dried bing cherries for a little healthification. A valiant nutritional effort, no?

This tactic backfired porque, as I said, my breakfast cereal saga always plays out the same way. Refills were had. Only this time, they were larger than normal since I made the brilliant call to eat out of a bowlmug bigger than my head.

Ah well, I embraced the necessity of refillage as an opportunity to try out a creation that’s been on my mind since it graced my Google Reader month’s ago.

This would be Amy’s brilliant cereal cake. 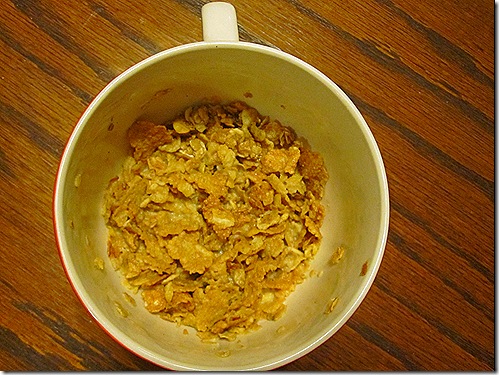 I always eat my cereal soggy (to the extent that I stopped eating Kashi Go Lean Crunch because it simply won’t soggify)—so when Amy suggested essentially marinating cereal in milk until it reached a cake-like texture, I drooled on my keyboard knew I’d fall in love.

The method: Allow your cereal to absorb the milk for a few minutes. Drink the remainder of the milk out. Marinate the seductively soggy cereal in the fridge for 10 minutes. 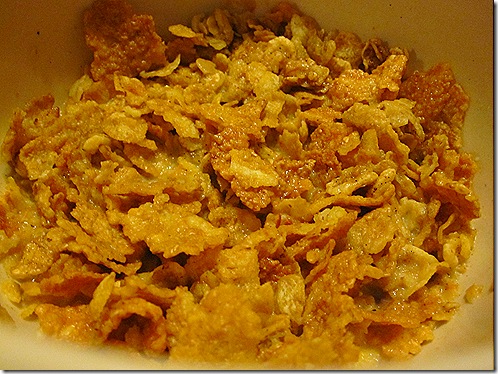 Cottage cheese, and now cereal cake? I’m falling in love with so many new-to-me double Cs.

By now, I should also know that grande breakfasts consumed shortly before pilates class makes for an uncomfortable hour of planks and rollovers.

Luckily, la profesora was the most entertaining Russian in all of Brooklyn. Yesterday, I found her particularly astute.

Mid-class, she said, “Come on, you can hold it for a few more seconds. You know you’re about to go home and eat a box of cereal.”

Way ahead of you, lady. 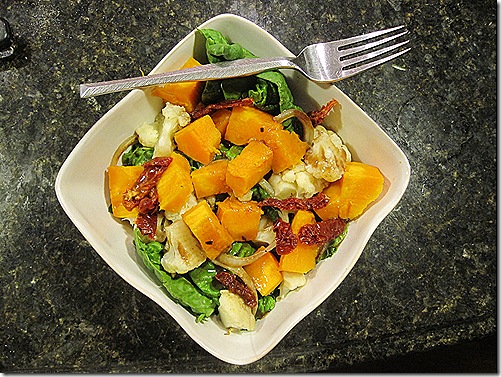 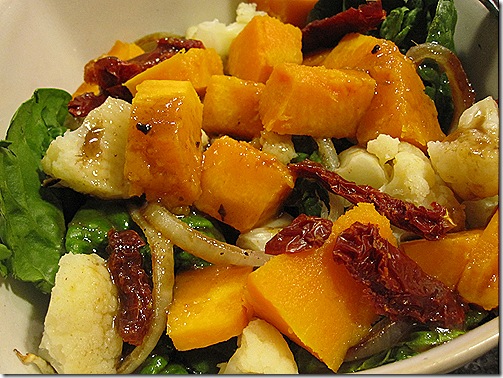 ‘Twas fantastic. The only problemo was that I really wasn’t in the mood for a salad. I only made it because I’m currently eating my way through a very produce-packed fridge.

By now, I should know that eating something I’m not in the mood for only necessitates a part dos of something I am in the for.

In this case, I was in the mood for something of the carby and hummusy nature.

I sought this out in a veggie burger.

On a sandwich thin: mucho Sabra, black bean and rice burger (frozen from way back when), roasted red peppers and kalamata olives.

Since I know you want to see it topless… 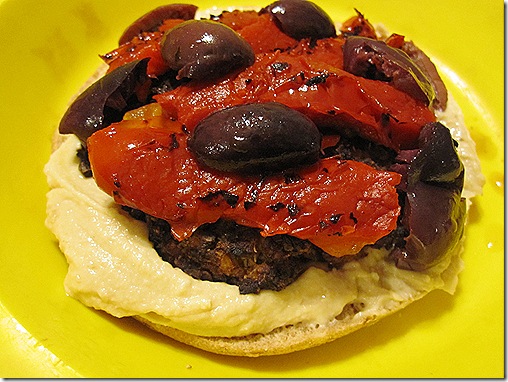 Mucho mejor. By now, I should know to always what you crave.

I ran with this lesson when I got snacky and, shocker, was craving carbs and queso.

Not just any carbs and queso, Snyder’s sourdough nibblers and Wensleydale cheese with cranberries. 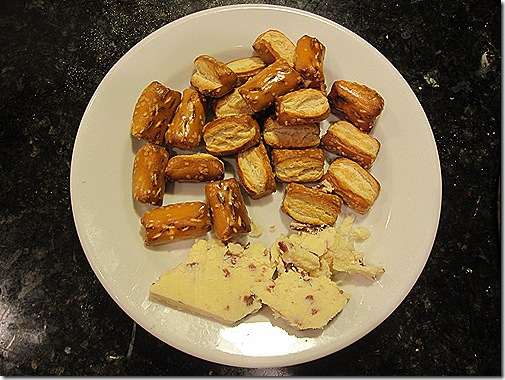 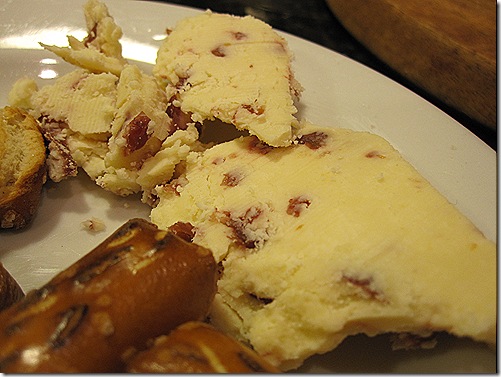 My food affair with that incredible white stilton cheese, on the other hand, has a history. If you ever see this cheese in stores (I rarely do), get it. I promise, you’ll fall in love (with me and the queso).

That little plato was snacktastic. However, it was a bit of a foodie fail because there’s something else I should’ve known by now.

When you have plans to feast with a fellow foodie, you shouldn’t do your own pre-gaming.

Mostly because if your dining companion is truly a foodie, he’ll expect some pre-game action, too.

Mildly full from the queso, I somehow managed to try the pre-feast goodies that my fellow foodie brought over. 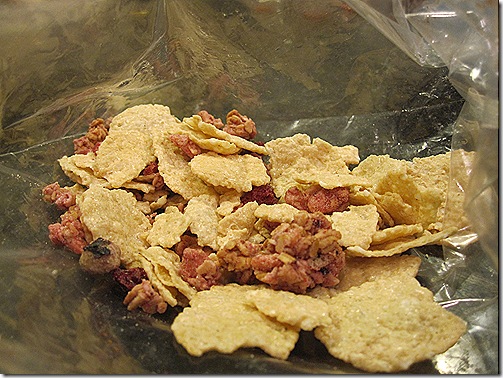 He recently picked this up and, having a pretty good gauge of my foodie taste buds, realized I’d be obsessed with it. I am. Another cereal I’ll have to add to the breakfast snack roster.

We also noshed on leftovers from an incredible turkey chili he made this week. 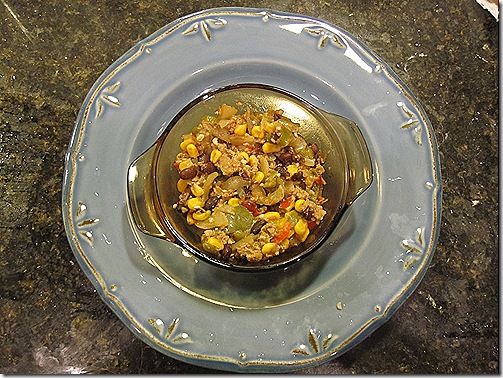 I looove chili but rarely eat it because I’ve never ventured into chili cooking. Anyone have a to-die-life chili recipe (preferably vegetarian)? 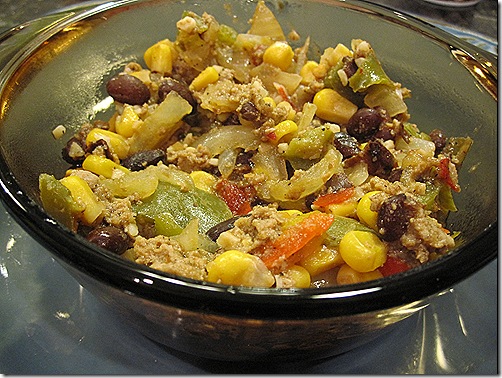 We weren’t sure what we were going to make—but we knew it would involve this. 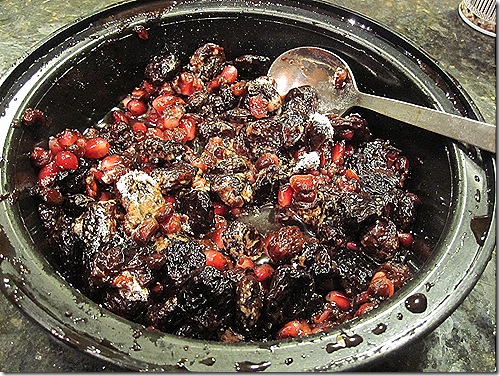 Oh, just some pomegranate arils and TJ’s dried cherries that had been marinating in a balsamic, pepper and agave medley for 24 hours.

I decided to make this magical mix the star of a couple ensaladas enormes. 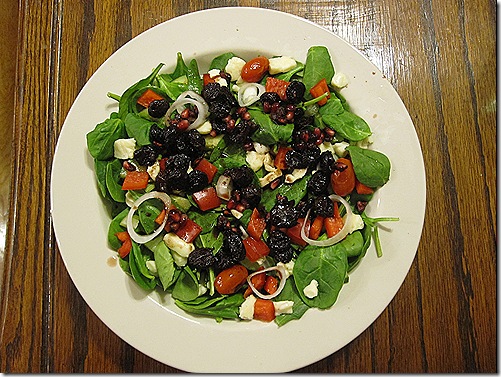 There wasn’t quite enough marinade left to dress both of our salads, so I mixed some extra balsamic vinegar and agave for good measure. 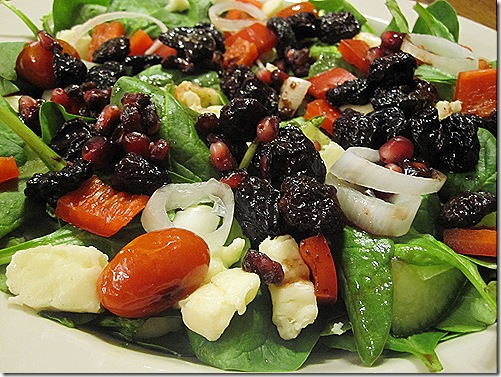 BEST. SALAD. EVER. The noises I was making during the devouring process were really embarrassing/mildly inappropriate. 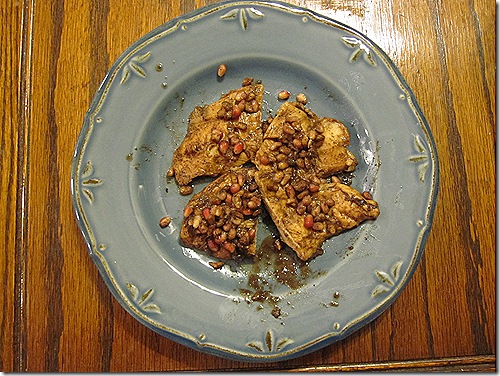 Chicken breasts, also marinated in balsamic, pepper and pomegranate, and then pan-fried. 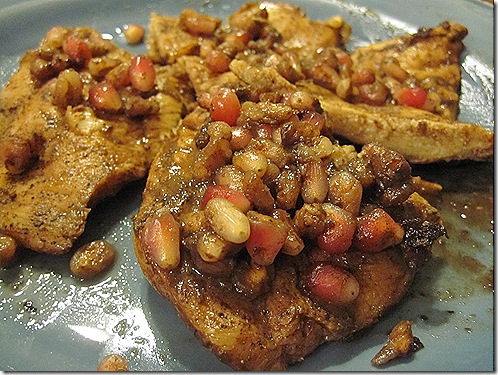 On the side, we had couscous. If you couldn’t guess, I’m going to go ahead and deem this the best couscous ever.

In all seriousness, this is my tried-and-true method for preparing couscous. 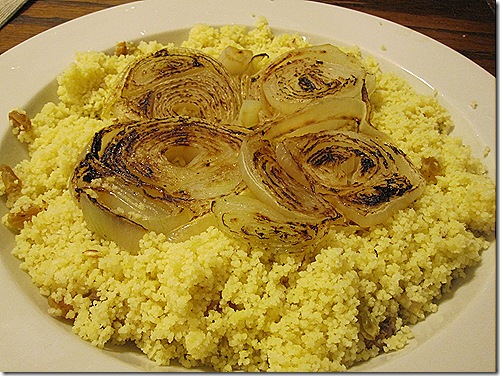 This is how we do it: I cook 1 cup dry couscous in 1 cup vegetable broth. In a separate saucepan, I grill onions and sauté minced garlic in EVOO. In a small bowl, I pour warm water over about 1/2 cup golden raisins so they plump up. When the couscous is done, I combine it all and season with sea salt, garlic and cinnamon.

A tip to keep couscous on the lighter side: Never add the recommended amount of butter or olive oil while cooking. Its flavor will mostly get lost during the cooking process. To moisten and deliciously flavor your couscous, you need far less butter. And you can simply add it to taste to each serving. 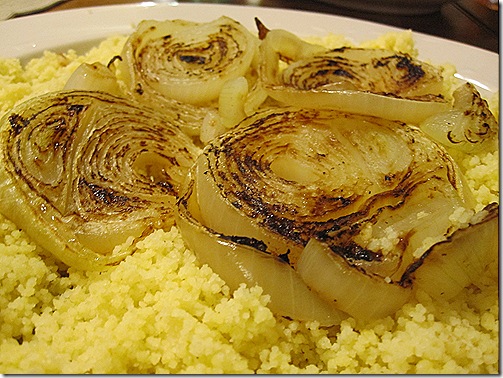 A tip to fall in love with your couscous: There is no such thing as too much grilled onion.

Despite singing cries of fullness after finishing this feast, we were somehow ready for dessert an hour later.

Not so bonita because it had been previously “tasted” by mi padre and mi fellow foodie—but this little box took delicious decadence to new heights. 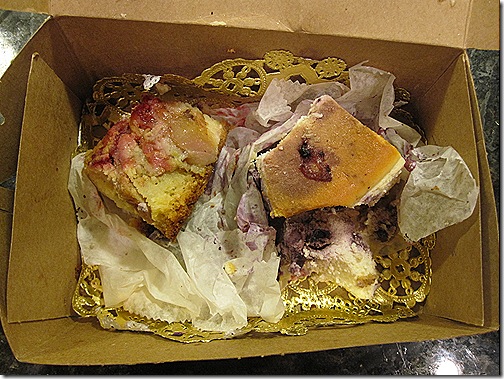 The goodies hailed from Cafe Lalo in NYC.

First up was a plum and pear fruit torte. 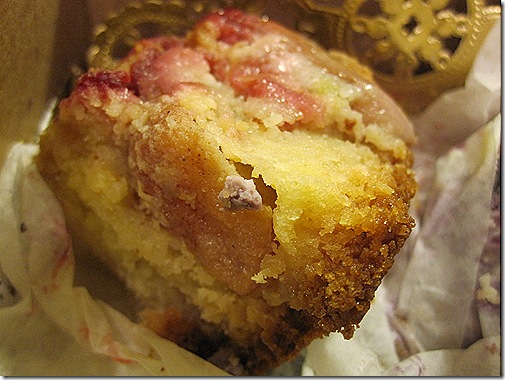 I’m not big on fruity desserts, but this was muy impresionante.

Not more so than la segunda: BLUEBERRY CHEESECAKE. 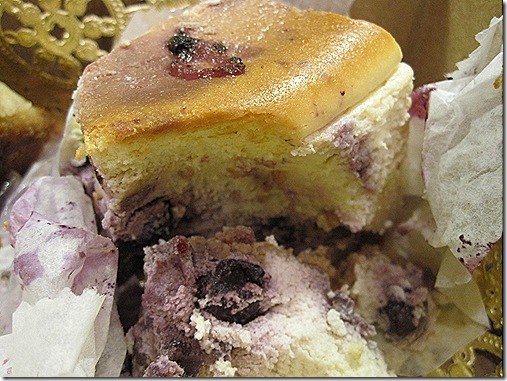 I have a loyal love-love-love relationship with cheesecake, and this ridiculous creamy wonder definitely made it into my top five ever tasted. 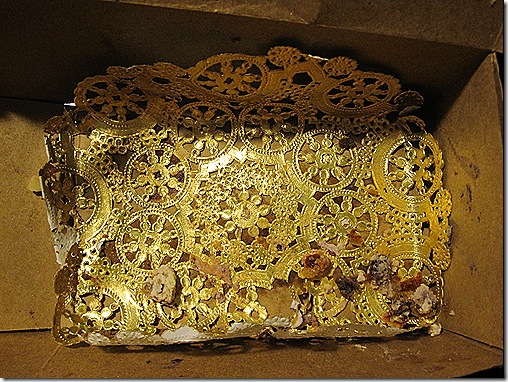 Do you have any food lessons that you feel you should know by now? I’m not sure I’ll ever fully grasp the “cereal does not keep me full” thing—but at least learning, and re-learning, that lesson is a delicious experience ;).