To which F word am I referring?

No, not that F word either.

Though I suppose now would be as good a time as any to address my flat-out failure as a blogger. Sí, I am referring to the fact that I set a new personal record by abandoning blogland for 10 días. Lo siento.

(If it wins me any bonus points, I ate my way through approximately half the bag of Newman’s Alphabet Cookies to dig out the letters in the picture above. FML?)

The F word I’m addressing in this post is actually the reason behind my impromptu hiatus.

Of the many Fs in my life—food, fitness, fashion, Fage—family is numero uno. So when some unexpected family matters arose—and were followed by longer-than-usual visits from la hermana y los abuelos—foodie biz took a backseat.

However, this does not mean that food was not had. In fact, when mi familia is involved, there is an influx in both quality and quantity of food consumed. This would be one of the primary reasons they are numero uno in my book.

During my diez-día hiatus, I managed to photograph nearly all of the fabulous food with which my face became acquainted. This has left me with 367 fotos. Let’s do some math. 367 pictures bestowed upon 1 failure of a food blogger who just took a 10-day vacation=OVERLOAD.

Instead of trying to fit 10 days of eating—and I should emphasize that these were 10 days of my eating…on ‘roids—into one post, I will share the DOS best food y familia-filled meals that were had during my absence.

The first is, of course, Thanksgiving!

Tofurkey Day kicked off, as it usually does, with mucho traffic. 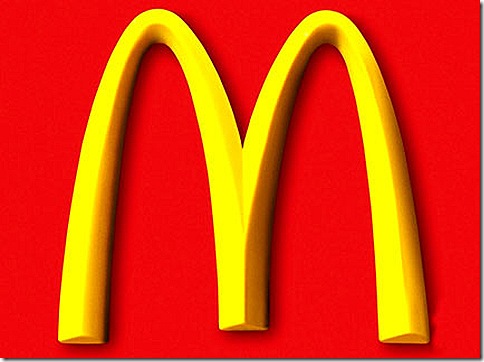 Large sweet teas and small french fries were a great idea because (a) la hermana, Dora y yo were all in much better moods post-fueling and (b) this detour prompted the GPS to re-route us on some obscure non-trafficky highway. Success!

After too much tiempo on the road, we finally arrived to our familia’s Thanksgiving destination, Aunt Lauren’s.

Within five minutes of stepping foot in la casa, I had a glass of vino in hand and was ready to multitask.

I am well-versed in the way of this sort of multitasking. And I was all about that apricot cheese. AMAZING.

By the time I was through schmoozing and snacking, the cheese stood alone. 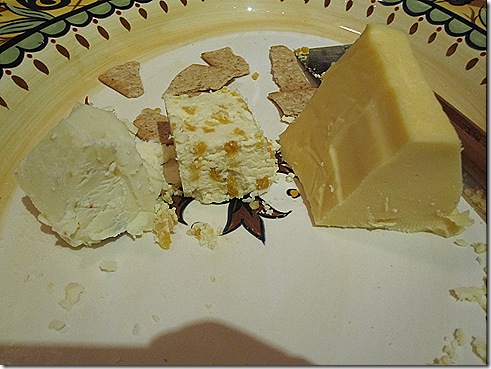 With some remnants of Kashi crackers…

In true Thanksgiving style, the pre-meal vino y queso left me full before dinner was served.

Not too full for pumpkin sopa.

Gigi had a less enthusiastic response.

I believe her words were, “why does it taste like this?”

Onto the main event: 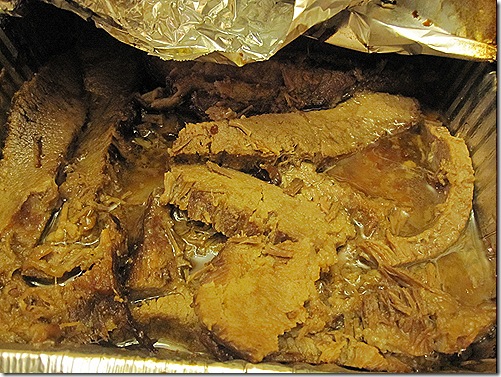 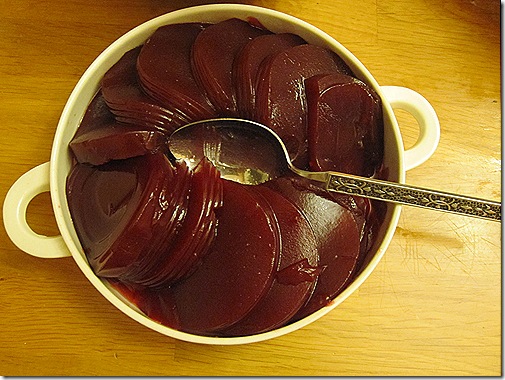 And wild rice with dried cranberries and raisins and some other magical ingredients that made this TG-newbie one of my favorites. 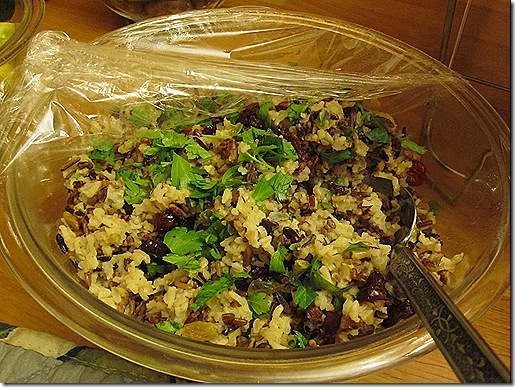 On the veggie front, roasted butternut squash, peppers and onions.

And now for the tres Thanksgiving staples that I look forward to all year: 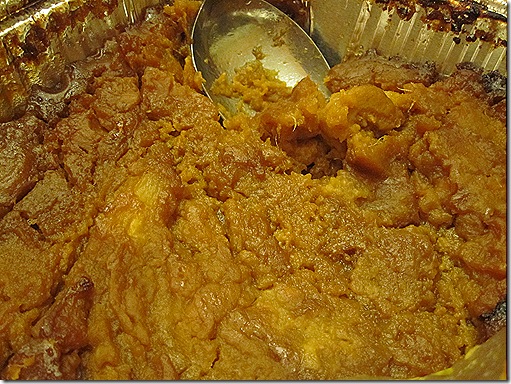 This year la fam made it with chunks of pineapple—which took it to a new level of deliciousness. 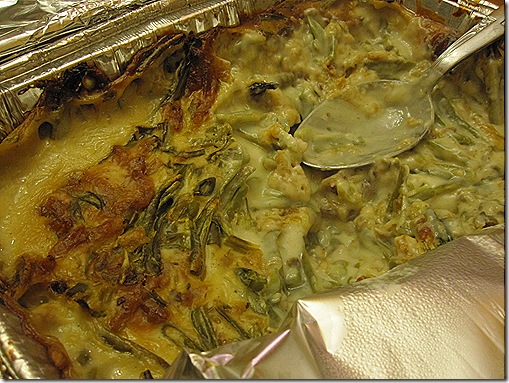 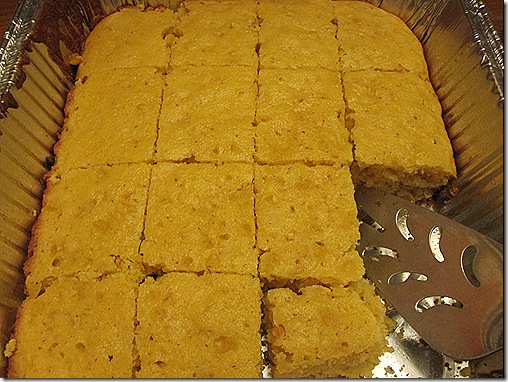 Cornbread is among my top five favorite foods. Addiction.

I cannot tell a lie. I was so full from wining, cheesing and souping that I had to stop after eating 1/4 of the way into this plate.

Fear not. I took a half-hour power nap and, in true foodie fashion, awoke with a renewed appetite. I cleaned the plate and then some. (The then some came mostly in the form of the cranberry wild rice because it was ridiculo!)

After another power nap, I got my third wind and began to ponder my dessert strategy.

The following piqued my interest. 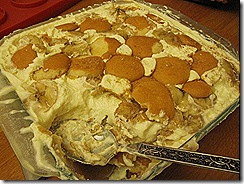 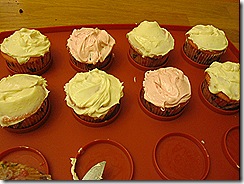 I decided on a pudding duo. 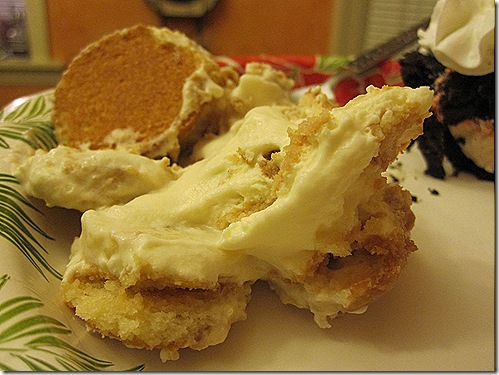 And with that banana creme wonder—there may have been un pequeño second helping—Thanksgiving concluded.

I know I said I was only going to share dos meals—but here’s a quickie that exemplifies why la hermana is my E.P.I.C.

On the morning after Thanksgiving, despite unfaltering fullness, la hermana y yo would be in the mood for Chinese food.

Yet another reason why familia comes first.

We went to my absolute favorite neighborhood restaurant, The Pearl Room.

The Pearl Room is an incredible Brooklyn seafood restaurant, and it has a special place in my heart because I hated seafood prior to my first Pearl Room dining experience.

Almost exactly two years ago, on the night before I left for my five-month stay in Spain, my dad took me to The Pearl Room in an attempt to “diversify my eating portfolio.” Both mi padre y yo were concerned that I was about to live—and eat—with a Spanish chorizo-loving familia when I—at the time—only ate chicken on occasion. In attempt to convert my “I only eat chicken”-card to an “I eat chicken and fish”-card, padre took me to The Pearl Room and we ordered several different pescado dishes to see if there was something seafood-esque that I liked.

I can’t even remember what we ordered, but I remember that we finished all of the dishes—our bites broken up by a whole lot of “This is SOOOO GOOD!” exclamation—and I set off to Spain a seafood-lovin’ señorita.

So gracias a The Pearl Room for changing my close-minded, chicken-only ways.

Anyway, back to Nanny’s cumpleaños.

The Pearl Room serves the best bread basket. I’m usually one of those bread-before-dinner skippers because bread y butter really does nada for me.

But at The Pearl Room, incredible olive rolls take the place of bread.

And a mysterious, I-don’t-know-what’s-in-it-but-it-must-be-crack-infused dipping sauce takes the place of butter. 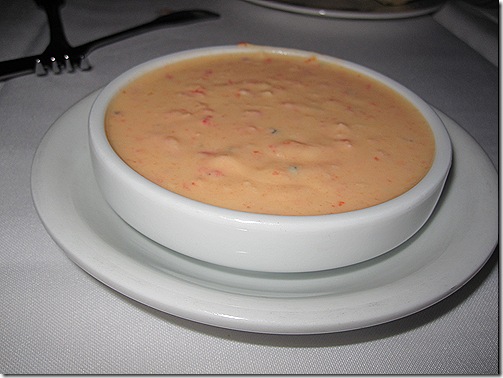 I never know how to describe the flavor of this sauce–I, uh, talk about it a lot–but I’m always tempted to compare it to vodka sauce. I think this is mostly because it looks like vodka sauce; its taste is incomparable. I’ve been doing a lot of Pearl Room–ing recently, so, during my next visit, I’m going to grill the manager for the ingredients. Or at least some hints.

Immediately after I took those dos photos, Gigi queried, “Ummm, why are you taking pictures of your food?”

All the cool kids are doing it, Dora.

Before ordering, hermana and I snagged a picture with the birthday chica.

Triplets? Ok, not so much.

Then the Shiraz came, and Sexy Shirl (a.k.a. Nanny) went to work.

Gigi—a little tipsy off her Shirley Temple—did a lot of jumping on Poppy. 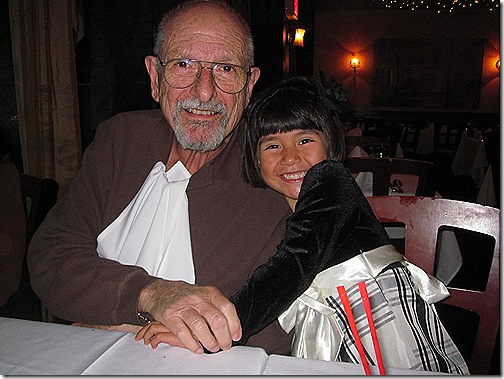 As in, “Gigi, you can’t encroach on Poppy while he’s eating.”

So Gigi began encroaching on me.

I pretended to mind.

But ultimately showed some amor.

And even participated in a “who has a longer tongue?” contest.

Silliness concluded as soon as cena was served.

Both Nanny and I were enticed by, but couldn’t decide between, the two fish specials—so we decided to share.

Nanny went with the hummus salmon atop grilled veggies and lentils.

AMAZING. The salmon was seared and then coated with hummus and broiled—so it had a perfect crisp layer topped with a creamy hummus layer. And the LENTILS… perfection.

I went with the sea bass, infused with wild herbs and lemon and served in a white wine sauce. 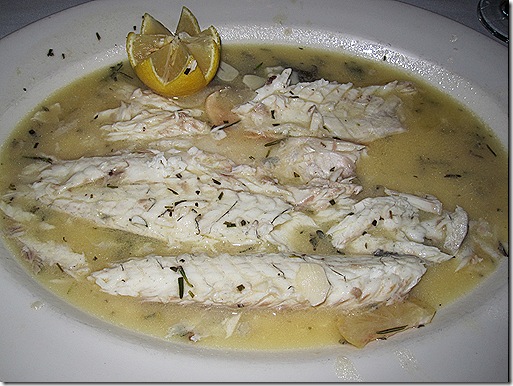 It was served as a whole fish and filleted at the table.

So simple and FRESH and increible.

On the side, I had grilled asparagus and shrimp risotto. 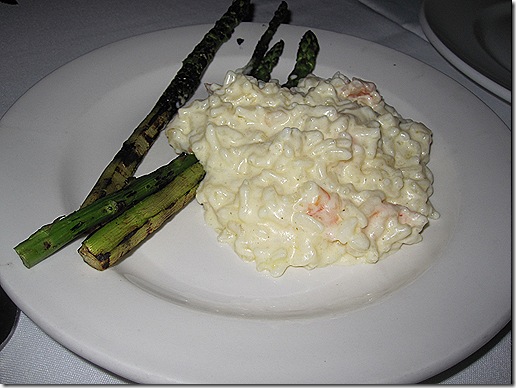 We had some very interesante, Shiraz-induced conversation. 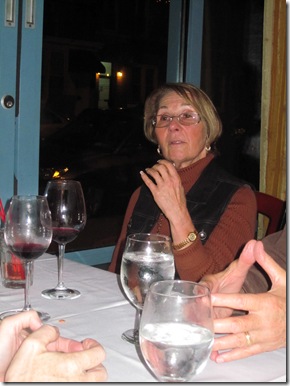 For example, we discussed the importance of being adventurous eaters and all agreed that it’s a shame when people stick to standard, it’s-been-done-before items when there are unchartered, creative flavor combos to be had.

At which point Poppy drew the following comparison: “It’s like sticking to missionary.”

Luckily, this flew over Gigi’s head because my little chica only had one thing on her mind.

(We may have forgotten the 7 candle, so Nanny was 5 for the night…)

Can you guess who finished first? 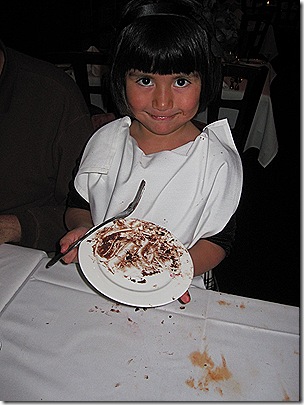 Speaking of ganadoras (winners), I suppose I should announce the winner of my Nutridel giveaway.

Sophia from Burp and Slurp!

Congrats, chica! E-mail me at thefoodiediaries@gmail.com with your address so I can get you tus galletas!

Bueno, I hope you all enjoyed as food y familia-filled a holiday weekend as I. And, as much as I enjoyed my downtime con la familia, I am muy feliz to be back!